This carnival themed birthday party is fun for kids of all ages.

Last week my son turned 6!  So for his 6th birthday, we decided on a Carnival birthday party.  And I had so much fun making it look like a Carnival at our house.

We were suppose to have the party outside, but Utah weather is never nice to me in early May and we had rain. Not just a little rain, but a solid 24 hours of steady rain. So we moved the party inside and made it work.

This carnival themed party is great for an outdoor party, but as we learned, also works inside if you have enough space for the games.

Originally we planned 4 games that could be played outside: Duck Match, Ping Pong Shot, Bean Bag Toss, and Balloon Pop. But when we had to move it inside, I really didn’t want to hand a bunch of kids darts to throw at my walls so we eliminated that game and did face painting instead.

Then instead of shooting ping pong balls with water guns, I grabbed one of my sons Nerf guns and we shot them with foam darts.

For the Bean Bag Toss, I saved 6 tin cans from my cooking the weeks before the party.  To keep the sharp edges away, I hot glued the tops back on them after they were cleaned and dried.

Then I made a little artwork to dress up the cans.  I love the mix of polka dots and stripes.  I used 3 bean bags that I already had on hand and it was ready to go!  The kids got to earn 1 ticket for every can they knocked over.

For the Ping Pong Shot, I made a simple pyramid with some scrap 2×4 and then used wood glue to attach 5 wooden golf tees. I put one tee on each level of the pyramid.

I found a pack of 8 table tennis balls at the dollar store to balance on the golf tees. The kids tried to knock them down with the dart gun and earned 1 ticket for every ball they knocked over.

The Duck Match game was the easiest, I bought this set from Oriental Trading and floated them in a few inches of water in a large tub I bought a few years back at Walmart. The kids earned 3 tickets if they made a match.

For the face painting, I used these Snazaroo face paints and really like them. They stay put after they are dry and wash off easily at the end of the day.

At each station there was a sign for each game station that had the name of the game and how they would earn tickets. I also included a sign for the prize table.

The kids had a ton of fun going back and playing the games as many times as they wanted. The only rule we had, they had to wait in line! That was a hard enough rule for a bunch of excited kids to abide by. It was fun to see them so excited when they knocked something over and earned tickets!

The party games are for the kids, but the food, that’s for me!  I love making treats and I love eating them too.

I did keep it pretty simple to go with the Carnival birthday party theme: caramel popcorn, cotton candy, homemade lemonade, and of course, cupcakes!

For the cotton candy, I purchased cotton candy at the dollar store and separated them into treat bags.  Then I printed out a cute topper for the treat bags and stapled them on top of the bags.

I used some scrap 2x2s and 1x2s to build a simple stand and used some finish nails to hang the cotton candy on it.

I asked my boy if he wanted buttered popcorn or caramel popcorn and of course, he chose caramel!  We make caramel popcorn about 2 times a week at our house. Yeah, we might be a little addicted :).

So this was a perfect excuse to make it again.  And we needed adorable little cups to put them in so I pulled out my trusty Silhouette.  I created a file to print and cut so that I could get 1 box per 8 1/2 x 11 sheet of paper and they ended up being the perfect size for little hands.

I found the cupcake stand and carnival themed cupcake liners at Oriental Trading and they were perfect!  A little buttercream frosting on the funfetti cupcakes and the kids loved them.

Then to finish it off, I made some lemonade to put it in my new Farmstand beverage dispenser.  Now it looks like a carnival birthday party!

For decor we let the games and food provide most of it, but I did make a Carnival sign with arrows.

My plan was to attach them to a 1×2 and stake it in the ground at the entrance to the backyard with balloons tied to the top. It would have been so cute, but we got a huge rainstorm that day.

So instead I taped them to my wall right inside the front door.  The only problem with this is that arrows were not pointing to the right direction and the kids kept pointing this out to me. I guess they don’t understand decor like I do 🙂

The party was a huge success!  My daughter is already planning her birthday party to be a carnival party just like it.

I hope you enjoyed our party!  I had too much fun putting it together and the kids has a blast at the “Carnival”.

Now I get to rest for a couple months before planning my little girls 4th birthday.  I’m hoping I can convince her to pick another theme… movie night?  tea party??  mermaid lagoon??? 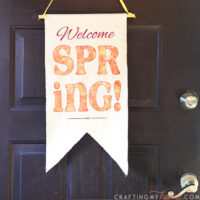 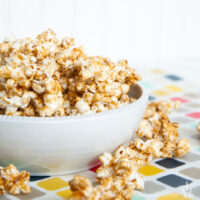 These are some really great ideas and so creative. We will definitely use them for our kids birthday party. Thanks for sharing and explaining it so well. It's very helpful!

The link for the carnival signs and arrows goes to the cotton candy toppers..do you have a link for that?

I think I got them all fixed. I had to separate the links with some text. I just checked them and they are working now.

Do you have the link for the cotton candy sign? When I click it it takes me to the arrow signs. Thanks I love this theme!!

Hello Corin, I just fixed the link so you should be able to access the cotton candy toppers. Thanks for letting me know it wasn't working!

This looks awesome. We did a carnival theme party for my daughter's first birthday and we had a blast. We did the popcorn in the old-fashioned popcorn bags, but didn't do the cotton candy like you did, which was a great idea. Cheers!

Thank you Jennifer. The carnival party was so much fun!

These decorations are wonderful! This post is featured at Funtastic Friday this week. Thanks for linking up and sharing with us. Hope you make it again this week.

Thanks so much for the feature Sherry. I am glad you liked our fun party.