How to Easily Make a Continuous Strip of Bias Tape

My sweet little daughter has been watching me sewing these past few weeks working on curtains and placemats and all things fun for the home.  And every time I sit down to sew, she pipes up “Are you making a dress for me???”.  She apparently wants me to sew her something!

I was hesitant to sew her something because when she was around 2 1/2, I was so excited to make something girly after years of only having a boy to sew for.  I made up a pattern for a peasant dress and sewed up the cutest a-line dress with contrasting sleeves and pockets.  It was adorable!  Then I used the peasant dress to make her a couple dress-ups, one was the yellow dress from Beauty and the Beast and the other, an Elsa dress complete with cape.  But she was going through a phase where she wouldn’t wear anything she didn’t want!

I bribed her to at least try on the little peasant dress.  She wore it for about 10 minutes so I could get this lousy picture then she took it off.  I did have a little better luck with the dress-ups.  She wore the Elsa one quite a bit, but the Belle dress she complained was too itchy and only wore it about an hour total.

All that work and I was so excited about it, but she totally squashed my enthusiasm to sew for her ever again!

It’s been a year and a half and she was asking so nicely that I decided to give it another go.  She is so excited to wear her new dress, even though it doesn’t have straps yet, that I am happy to say I may start sewing a lot of cute dresses again!

While I was working on this dress that I will share soon, I was working on the bias tape that goes around the arm holes.  I was using a trick that I learned in fashion school and thought it might not be one that not everyone knows about so I decided to share.  It’s all the little tricks I learned that really made schooling so awesome!

To make a continuous strip of bias tape, you will need to start with square (or rectangle) of fabric.  How big you ask?  Well that all depends on how much bias tape you need.

You can estimate how much bias tape your piece of fabric will make by measuring the fabric on the bias from end to end and times it by how many strips you will get from the width of the fabric.  I was working with a square that was about 7 1/2″ x 22″.

Start by cutting off the two sides on the bias (45 degree angles).  My ruler has a line that is 45 degrees (as well as a couple other degrees but I pretty much only us the 45).

It’s kinda hard to see in this picture, but it is the line lined up along the bottom of my fabric.  Then I can just cut along the edge and my fabric is a perfect 45 degrees.

Why 45 degrees? Well that is the beauty of bias tape.  The fabric is cut on the bias which is diagonal from the straight grain and that allows the fabric to stretch a bit.

If you tug a piece of woven fabric with the grain, there is usually very little give but if you give it a little tug on the bias, it will stretch.  The bias tape is so nice because it has some give and can stretch beautifully around curves in your garment.

You could try using strips of fabric cut with the grain but they wouldn’t have that stretch and the curves would make you want to pull your hair out!  So take a little time up front to make your bias tape right and your project will be prettier in the end.

So now that we have a piece of fabric with 2 ends cut on the bias, you will flip it over and draw lines on the back with the bias.  You can’t really tell in the picture, but I did rotate my fabric to make the lines.  The lines run parallel to the cuts I made to make the two edges on the bias.

How far away you put your lines depends on how big you want your bias tape.  Typically you will fold it in 4ths so that the raw edges are perfectly concealed inside the tape so plan accordingly.  I chose 1 1/2 inch strips for my 3/8 inch bias tape.

The next part is the trickiest, but once you get the hang of it, it will be no big deal.  You are going to make a tube with the fabric.  You will start by lining up the edge of the fabric on one side to the first line.  So your tube is a little wonky because it is shifted slightly.  Also, line up your lines about 1/4 inch below the edge of the fabric because you will sew a 1/4 inch seam allowance and then your lines will be lined up perfectly instead of 1/4 inch off.

Sew down that line you pinned.  In this picture it is easier to see how the fabric is lined up to the right one line.

Next you want to press the seam out flat.  It is way easier to do that now instead of after you have cut the tape or else you will have to press a lot of little seams.

Now you will start cutting along your lines.

Just grab a good pair of scissors and follow the line around and around.

And you will see a beautiful piece of bias tape being formed.

Depending on how you will be using the bias tape, you can leave it like that or press it in halves or quarters.

I pressed mine in half and rolled it on a piece of cardboard to hold onto it until I was ready to use it.

See super easy.  It is the quickest way I have learned to make a long continuous strip.  It comes in very handy when making lots of bias tape to bind a quilt or make piping for the cushion of a chair.  I have used this trick for both of those things and it saved me so much time.

I hope this helps you on your next sewing adventure… what will you be working on next? 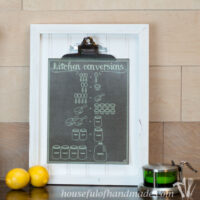 You make this look so easy! I've shied away from making bias tape. Maybe I need to change my ways, follow your direction, and make some!!

Thanks for sharing on my Grandma Ideas Sharing Time link party.